Vikings™ is a NetEnt video slot with 5 reels, 3 rows and 243 paylines. The Vikings video slot features Hotspot Feature, Shield Wall Feature, a Raid Spins symbol and a Raid Spins game mode with 3 Hotspots in reels 2, 3, and 4. In Raid Spin the game is transformed into a 7-reels, 5-row, 78,125 ways to win.

The theme of this game is based on the famous Viking television series, and is a historical drama created for the History and HBO channel that premiered in 2013. If you’re familiar with the series, you’ll feel at home as you enter the game.

If you haven’t seen the series, you’ll probably appreciate the work NetEnt has done on the visual production of the reels in front of a Nordic, winter and gloomy landscape, made up of imposing hills leaning towards an icy lake. And don’t be frightened by the solitary crow that watches your every move! 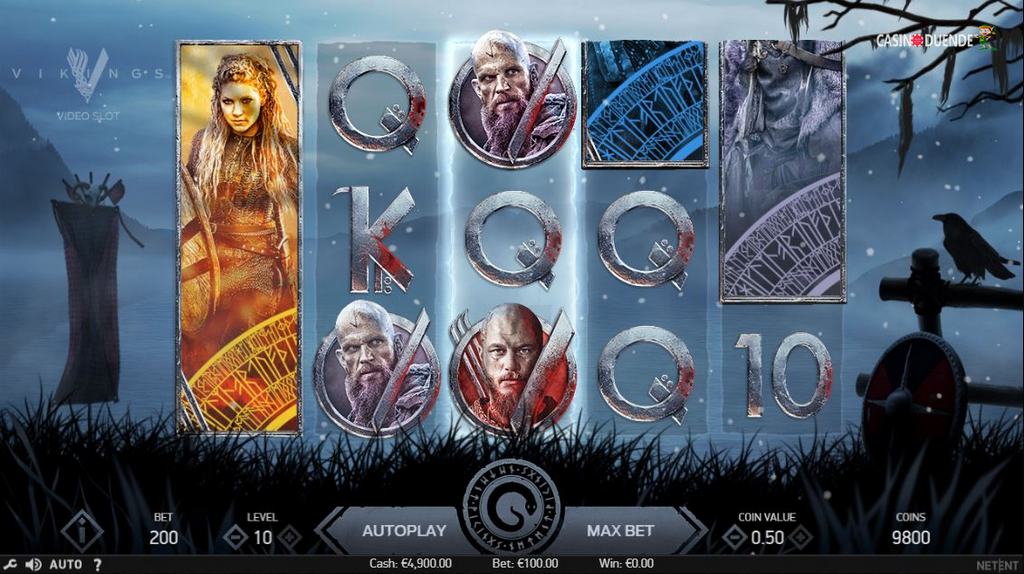 Players can bet between €0.20 and €200 per play, either on a mobile phone or on a PC desktop, you’ll see Bjorn, Lagertha, Ragnar and Floki adorn the reels with their presence.

The most important feature of Viking is the Raid Spins bonus which rewards 7 Raid Spins and which are played on 7 reels in conjunction with 78,125 ways to win with 3 Hotspots – players can get 27 giant Viking symbols which pay the maximum cash prize of x10,000 your stake on each free spin.

Although the maximum bet is relatively high, in reality it is a revealing sign that it is not a high-potential video slot. The 96.05% return to the player is nothing out of the ordinary and is more or less within the expected range.

From what we’ve seen so far, the Vikings slot could become NetEnt’s best game. As a leading developer of slots, it is clear that NetEnt is an expert in this field. There are other slot developers who have released games with similar Scandinavian themes, but the Viking slot is definitely superior to the rest.

The features of Shield and Hotspot pay 243 times your bet, while the large winnings of  x10,000 your stake in a single spin are reserved for the Free Spins feature. Make no mistake, it’s an ambitious slot machine, built on a solid foundation, NetEnt took another positive step towards a very interesting future.

Are the earnings good with the main game?

Can I win a lot of cash during Raid Spins?

3D slots have been rated “above all” by some critics. That said, it has potential for some incredible victories thanks to a 7-reels feature that increases to 78,125 ways to win. Stacked Vikings symbols are reinforced and gain strength especially when they land on a Hotspot, transforming other symbols into the same Viking symbol.

How many turns are needed for the Raid Spins function to activate?