The game developer Push Gaming in recent years is on top – they are one of the most successful suppliers of online slots in 2018. The reason for this success lies in slots with a large dispersion and a high potential winning percentage.

In support of this, the latest release from the Push Gaming studio is the video slot Viking Clash, a game with a huge bonus potential in the bonus round, as well as an intriguing design and additional functions. The design of the slot is first-class, and the winning features in the base game are not so bad – 800x.

However, the real “dose of pure adrenaline” is hidden in the function of free spins. When this function is activated, additional “wild” symbols with multipliers appear on the reels of the slot, which can lead to the fact that your bet can increase by 13200x for each free spin. If you already like it, then read on …

In the slot Viking Clash there are 2 separate sets of rams – one red, the other green – each of them contains 5 reels, 3 rows and 25 fixed paylines.

The return of the slot is 96.6% (RTP) and the highest payout ratio is 13 200x. The betting range in the Viking Clash slot starts from 0.25 to 100 coins per spin. The theme of the slot is related to the mythology of the Vikings.

In the background of the reels of the slot is a Viking ship in the open sea, with rolling waves. The symbols of low value represent 3 runic stones.

There are also 8 bonus symbols consisting of an ax, a hammer, a Viking girl and a Viking boy, as well as four Viking warriors.

There is also a wild symbol that pays out 16x, a redshift of the red catapult and a scatter of the green gun. Both of these symbols appear when the function is called free spins. 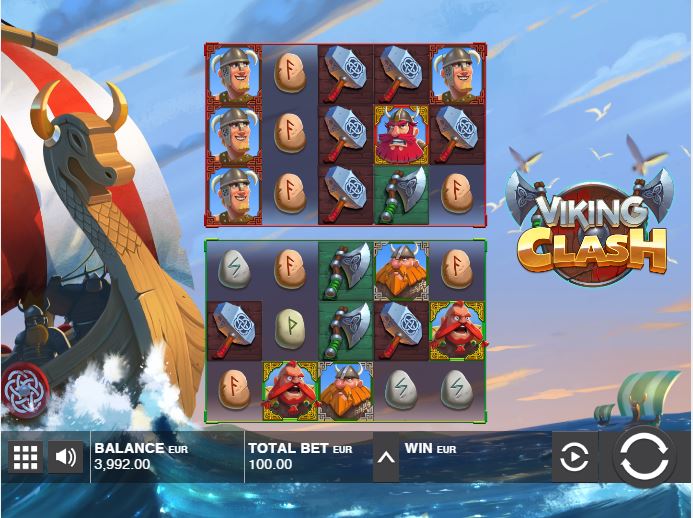 Characteristics of the functions in the Viking Clash slot

During the base game, you must control the random appearance of the Wild Ships symbol. This is the appearance of a large wave, below the reels, after which the “Wild Ship” symbol will be displayed in arbitrary positions on reels 3 and 5.

The drums remain static throughout this function, but the Wild Ships symbol breaks from right to left through the drums, stopping at each drum, in this process you can see if the winning combination is created or not.

The sails of the boats continue to fill with the wind, until they begin to decrease from the end reel 1.

Then, the real “positive” starts at the launch of the bonus game feature. Players who are already familiar with other Push Gaming slot machines, such as Tiki Tumble, Fat Rabbit, know that launching bonus rounds on these slot machines is not an easy task.

To do this, it is necessary that there are three or more dispersions of the red catapult or the green canyon, anywhere on the drums. When this happens, you get 6 free spins. When the round begins, each symbol of the Red Catapult on the reels will give you the Wild Shield, randomly placed on the green reel.

Similarly, each Green Cannon symbol that appears on the reels at the beginning of the round activates the wild shield, which appears randomly on a set of red reels.

Plant more red or green scatters during the free spins that give extra spins, and additional “wild shields”, and it becomes more interesting, since if the wild Blield started on the drums and lands on top of another, the multiplier is formed in this position of the reels. All Wild Shields are sticky, so they and any multipliers remain in place for 6 or more turns.

The feeling of playing a new Viking Clash slot from Push Gaming is like your blood, which flows with a crazy speed in the free spins. The Vikings Clash is a medium and high dispersion slot with 96.6% RTP and the maximum gain potential is 13,200 times higher than the rate per turn in the bonus.

The maximum gains in the main game are 800x, maybe more with the Wild Ships feature, although the chances of this happening are very small, since both sets of reels require a full screen of the upper symbol.

The unusual design and the high potential and the average dispersion with a return of 96.6% of RTP make this game interesting by default, and in fact it turned out to be quite good.

As expected from Push Gaming, it’s a bit difficult to launch a bonus feature, however, when this happens, the chances of a big win are very high!

Thanks to our partnership agreement with the Push Gaming studio, Casino Duende gives you the opportunity to try this video slot, completely free on our website!

For most of the online Push Gaming casinos, the Viking Clash slot will be available from August 21, 2018. If you want some more Push Gaming, we suggest playing the Turn it Up! Slot, another popular release this year.

Valley of the Gods Slot