Golden Glyph is an impressive feature-rich Quickspin slot that features a 7×7 design that is perfect for our new portrait mode! Features include Tumble Mechanics, a Power Wild function and an Ignition function with four magic Ignitions: Golden Scarab, Eye of Horus, Flame of Fire, and a Free Spin Bonus.

The Golden Scarab spreads wealth on the grid (4-10 Wilds), the Eye of Horus uses its magic to remove low-paying symbols and transform them to payouts, and the Blaze of Fire burns up all the normal symbols in any row and column that crosses its path and transforms them to payouts!

And keep an eye out for the special Golden Glyph Wild symbol in the Free Spins Bonus – this symbol holds all the keys to a BIG win. If you’re lucky, you can win up to 13,000 x your bet! 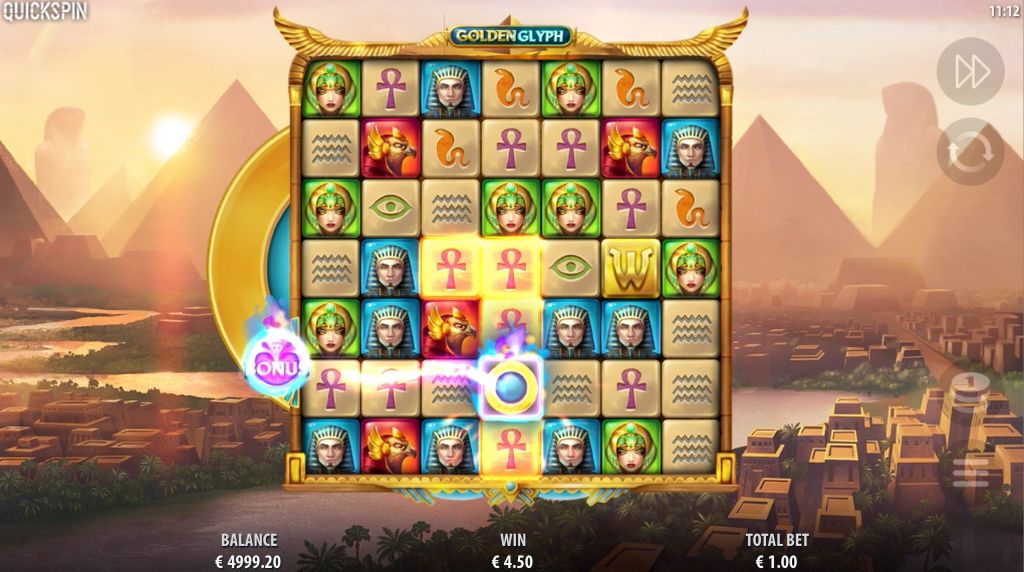 The Tumble Mechanics are available in both the base game and the Free Spins Bonus! Any symbols that are a part of a winning cluster will be removed, and the empty positions fill up with new symbols that come falling down from above.

Any new wins will be added to the existing win. The tumbling ends when there are no new winning clusters.

The Power Wild feature is available in both the base game and the Free Spins Bonus! After the winning symbol clusters have been removed and before the tumbling, a Power Wild will be awarded in one of the empty positions on the reels.

At most, one Power Wild will be awarded per tumble. A Power Wild is evaluated and removed as a Wild, and an additional Power-Up will be activated for each Power Wild that’s removed.

The Power-Ups will be activated when you get a Power Wild win! This game has 4 Power-Ups: Golden Scarab, Eye of Horus, Blaze of God, plus the Free Spins Bonus Power-Up.

At the beginning of each spin, 5 Power-Ups are randomly determined on the golden wheel. The last Power-Up is always the Free Spins Bonus Power-Up, and the remaining four are randomly awarded from the other Power-Ups (Golden Scarab, Eye of Horus, Blaze of God).

The Golden Scarab spreads Wilds on the reels! This Power-Up spawns 4-10 randomly placed Wilds in the game area, which is followed by a win evaluation.

The Eye of Horus removes low paying symbols! This Power-Up targets one randomly selected low paying symbol and removes all occurrences of that symbol in the game area, followed by a tumble and a win evaluation. Each removed symbol will award 1/20 of your current bet.

The Wild, Power Wild, and Golden Glyph Wild symbols will not be removed by the Blaze of Fire.

During the first free spin, the special Golden Glyph Wild symbol will be placed in a random location. This symbol is your chance to win BIG – if you manage to level up the Golden Glyph Wild all the way to x99, you can win a whopping 13,000 x your bet!

SlottoJAM Casino Review SlottoJAM is a new online casino that was introduced in 2019 by the StakePartners team. It has......

TornadoBet Casino Review TornadoBet casino has been whirling in the gambling industry since 2019. Despite the fact, that the website......