I’ve been strangely fascinated with Ancient Egyptian civilization ever since I was a child. The pyramids, the bizarre obsession with cats and the unusual, gender-bending fashion choices titillated and perplexed my naive little mind. Little did I know that a couple of decades down the line my poor gay heart would still be yearning for the intrigue, the drama and the mystery of Ancient Egypt. Spooning brains out of noses? Yes, please! Skirts that barely cover your crotch? I’ll take it! Winged eyeliner and cats with bad attitudes? That sounds like a civilization after my own damn heart.

Unfortunately, I’ll never be able to live out my fantasies involving Cleopatra, a mini skirt, and a wooden spoon but I came pretty darn close playing Egyptian Dreams Deluxe, the latest release from Habanero. This slot gave me a pretty good inkling of what it would have been like to take on Ancient Egypt and let me tell you, it’s pretty great. Habanero did something magical here – with fantastic gameplay (on any of your devices – though I enjoyed it most on my tablet) and a sultry soundtrack, this game really is a pleasure. 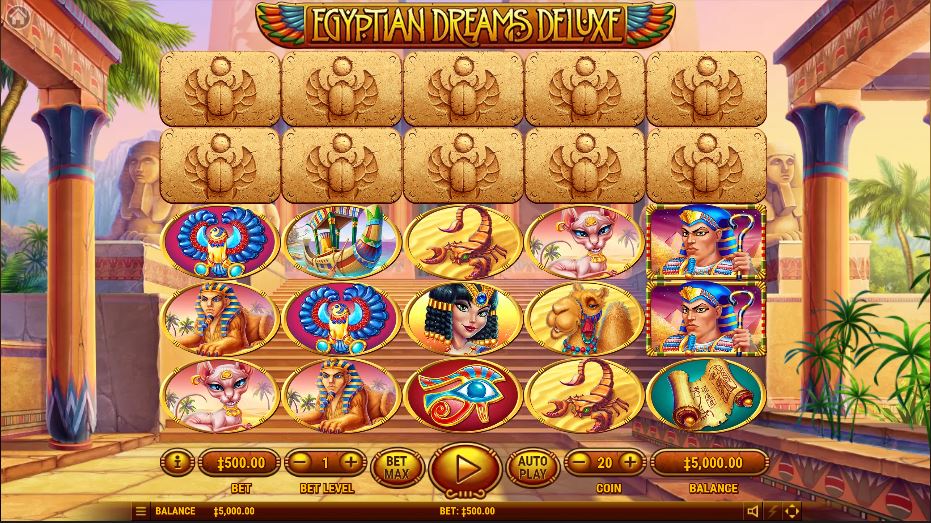 Egyptian Dreams Deluxe is a 5-reel, 243 pay-line video slot game. There are a hell of a lot of symbols, all of them sticking to the theme of Ancient Egypt. The Pharaoh, a rather stern looking gent, acts as the Wild and can substitute for all of the other symbols except for the Bonus which is represented by a pyramid. Other symbols include, a sphynx, a camel, a wooden boat, a papyrus scroll, a strangely anthropomorphic looking lady-cat, an evil eye, a bird, a scorpion, a scarab beetle and a lady who I think is supposed to be Cleopatra but looks absolutely nothing like the version of her from my dreams (my only complaint). Okay, I think that’s it. I played this game many times, but there are so many symbols that I’m still not 100% sure I that I have them all.

Habanero controls are relatively straight-forward if you’ve played slots before you should be able to handle this game. Either way, here they are just in case you’ve been in a medically induced coma for the last year or two. On the bottom left you’ll find the controls for your bet, bet level and “bet max.” By hitting “bet max,” your bet will immediately be set at 250. You can also control your bet by clicking on “bet level” which ranges from levels 1-10 and goes up in increments of 25. On your far right, you’ll find the Auto Play button which, upon clicking it, will allow you to choose how many spins you’d like it to do.

You’ll also see your balance display and your total coins. In the bottom right you’ll find a music symbol allowing you to either turn the sound effects off entirely or to increase or decrease the loudness of it according to your preference. It’s pretty user-friendly, with controls that help you to set reasonable parameters within which to plan your gambling.

The Pharaoh represents the Wild symbol which can substitute for all other symbols aside from the Pyramid which acts as the Bonus. Also, landing between 2-4 Pyramids from left to right will award you with a single re-spin. When the re-spin begins, the Pyramids will be locked in place. Landing 2 or more Pyramid symbols anywhere on the reel will reward you with 10,15, 20 or 30 free-spins, increasing according to the number of Pyramids on the reels.

When you first spin the reels, you’ll notice that only the bottom three rows move while the upper two are locked in place and covered by the Scarab beetle symbol. You might be a bit confused at first (I know I was), but it’s pretty straightforward. When the Pharaoh appears directly under a Scarab block, it will break it and unlock the slot the Scarab covered. When you unlock all the Scarab blocks in the base game, you will get awarded with 30 spins. At the end of the feature, the upper rows will once again be covered by the Scarab beetle blocks. Honestly, this feature isn’t something you see all that often, so I was pretty excited about it.

Egyptian Dreams Deluxe is a seriously technologically advanced game. I was blown away by the graphics, the colors, and the fantastic gameplay mechanics. Overall, this game has a lot to offer.
It offers some excellent features, and on top of all of that, you stand a chance to win 1 of 3 progressive jackpots if Lady Luck’s on your side. All you have to do is hit the reels and hold thumbs.

Although I’m still trying to reconcile my great love for Ancient Egypt with the realization that I’ll never be able to penetrate the mystery that shrouds the long-gone civilization, Egyptian Dreams Deluxe certainly did help tide me over until my next fix of binge-watching documentaries on the Pyramids (were they built by Ancient Aliens? Stay tuned…). This game is genuinely just good fun. It’s simple to play, has fantastic graphics and is available on all devices. So, what’s not to love?

SlottoJAM Casino Review SlottoJAM is a new online casino that was introduced in 2019 by the StakePartners team. It has......

TornadoBet Casino Review TornadoBet casino has been whirling in the gambling industry since 2019. Despite the fact, that the website......