Asgard is the very latest slot machine to come from the creative geniuses at Pragmatic Play. As you can probably guess, the slot has a Norse mythology theme and features Loki, Odin, Thor and Freyja. This mobile compatible slot machine has a 5 reel, 25 payline setup and can be played from 0.25 to as much as 125.00 a spin.

Travel back in time as you spin the reels and wait for the much-loved characters to make an appearance, to trigger random features that can award big cash prizes. 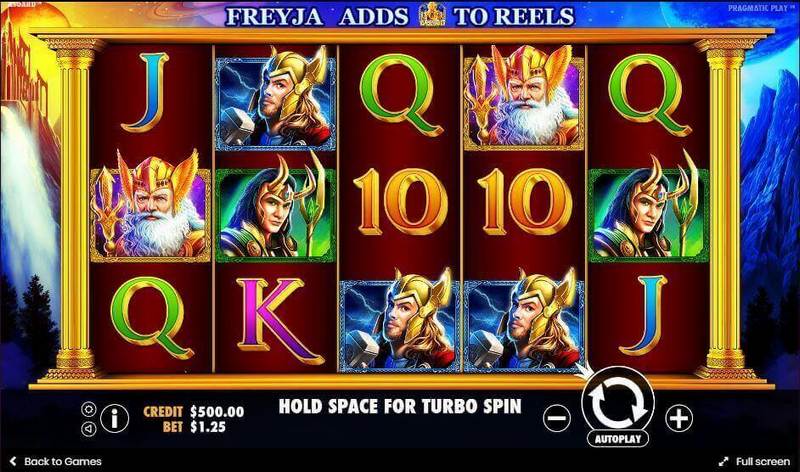 The reels of the game are situated on a distant planet far from earth. Golden pillars keep the symbols on the reels whilst a cosmic galaxy swirls around in the background.

The lower of the reels is where you will find settings, sound options, a button to increase or decrease your bet, a spin and auto spin button and status bar which shows your balance, current bet value and little messages on how to play. Once you’ve adjusted the bets to suit your budget, you can start spinning.

Base game wins are boosted by the wild symbol, which of course is the Asgard logo – this will substitute for all game symbols bar scatter. The scatter symbol is the mysterious ice mask and landing three on the reels, will unlock the free games bonus. The following random features are thrilling and can appear when you least expect it;

When three ice masks appear, you will be awarded the four features above for the duration of your free spins. Landing Freyja during your free games will see an additional number of wilds appear. Loki appearing will see symbols transforming into random symbols on each spin. Thor spins will turn all character symbols into wilds and stacked wilds appear during Odin free spins.

Asgard is a highly visual online slot that certainly packs a punch. There’s plenty of features to keep you on the edge of your seat along with big base game wins. When we played, we managed to trigger the random features on a regular basis, although the free spins did take a lot of work to get hold of.