For those of you who may not know, Athena was an ancient Greek goddess, who was bestowed a great title; the protector of the cities, which would see her becoming the greatest protector of all cities – including Athens; the city that she was named after.

Athena would never travel without her golden owl, the keeper of sacred knowledge and now you can accompany them both on a virtual journey like no other. 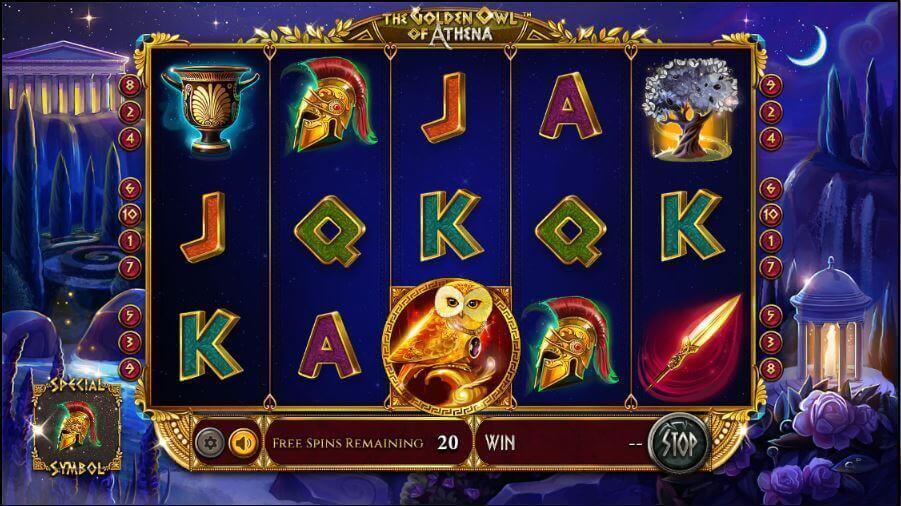 PLAY AT THE GOLDEN OWL OF ATHENA SLOT!

The Golden Owl of Athena is a stunning classic 3D slot creation from Betsoft, that features plenty of bonus features to keep players on the edge of their seats.

The 5 reel, 10 win line setup is stationed within the exotic garden of Mount Olympus in ancient Greece. Sitting below the reels is a control panel with the option to mute sounds, increase bets, view the pay table of symbols and payouts as well as the ability to use the auto play feature.

Before setting the reels in motion, players should adjust the bets to suit their budget. A message panel is also situated to the lower of the reels, with little messages of encouragement.

Symbols featured on the reels are; 3D card values of J, Q, K and A as well as Athena herself, the colosseum, silver tree, golden feathers, golden helmets and a golden urn. Athena’s golden owl is a magical symbol with two functions; it is both a scatter and a wild symbol.

Spin in at least 3 scatter symbols to trigger a multiplier payout of up to 2,000 (depending on your bet) and 8, 12 and 20 free spins respectively. During the free spins feature, a single symbol will be chosen at random and should you manage to spin in a number of these special symbols, you could see them expand to trigger greater wins.

The double up feature is basically your standard gamble bonus, which will allow you to gamble base game wins for more cash. Click the double up icon after any win and try your luck. Choose to gamble all or half your winnings on the toss of a coin.

The Golden Owl of Athena is a beautifully created video slot with a powerful feature; the free spins, but they like to remain hidden for as long as possible.

Bets will suit players with low and big bankrolls, but the big cash will only fall to those who have the resources to chase the free spins. Base game wins are aplenty, but they tend to be small in value. By playing max stakes of 10.00 per spin (which isn’t exactly breaking the bank), players can scoop a non-progressive jackpot of 5,000 in cold hard cash!

Landing a win line full of Athena symbols will trigger the highest payout, closely followed by a 2,000 payout for a five of a kind combination of the colosseums, silver trees or golden owls. We found this slot to be a medium variance, which offers frequent small wins.